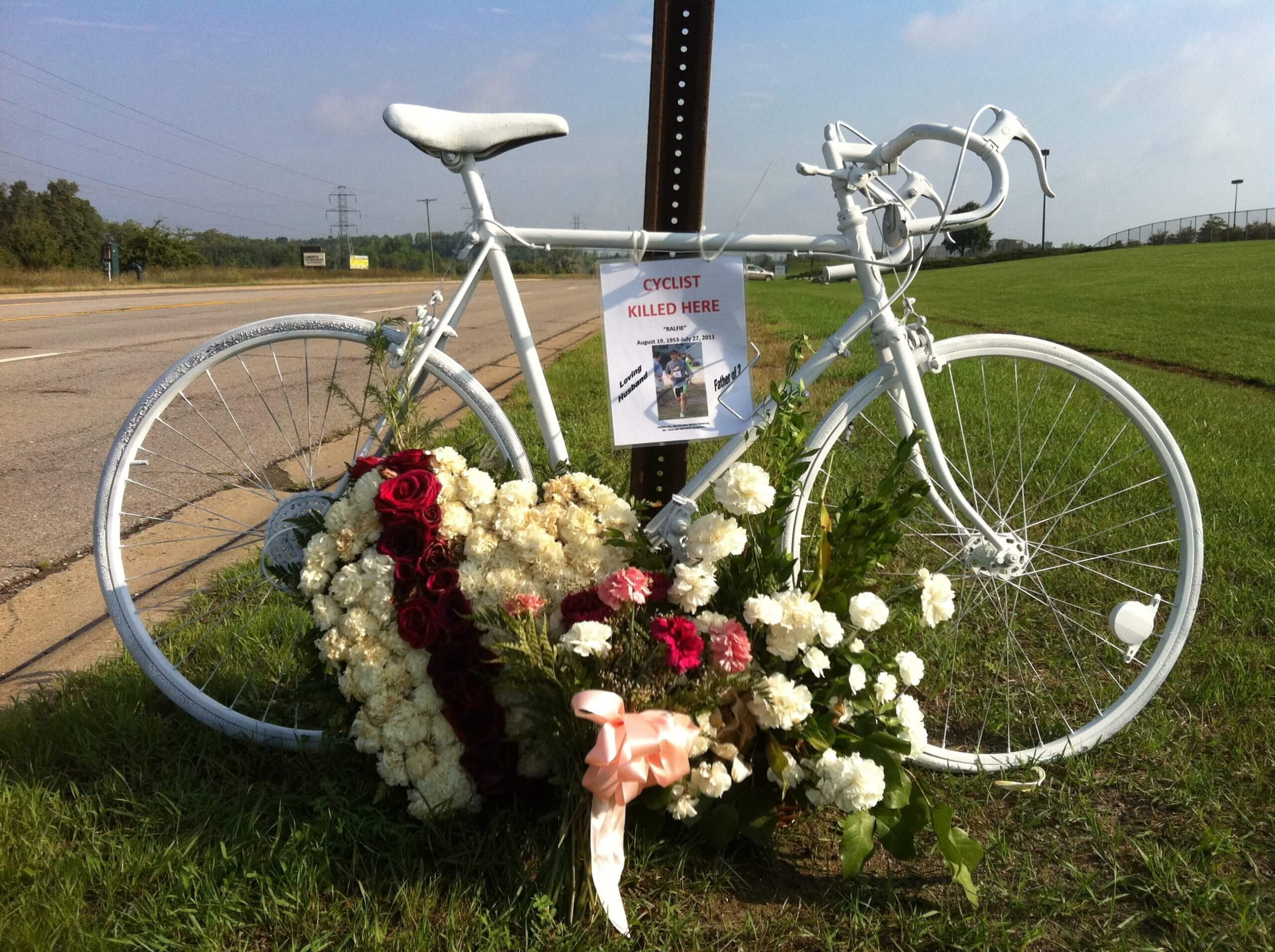 Photo CC-BY Rory Finneren, 2011. “Ghost Bike we set up for my father, Ralph Finneren. It’s located on Giddings Rd. directly outside of the General Motors Orion Assembly Plant in Orion Township, Michigan, very near where the crash occurred.” This was one of the first ghost bikes in the state of Michigan, a public memorial marking the site of a fatal crash.

This week in Lansing, a bipartisan and bicameral group of four Michigan lawmakers – Sen. Sean McCann, Sen. Ed McBroom, Rep. Julie Rogers, and Rep. Bronna Kahle – introduced legislation to protect vulnerable road users in our state. If passed, these bills (SB 580 and 581, HB 5181 and 5182) will create enhanced penalties for drivers who injure or kill a vulnerable roadway user (VRU), including people who bike, walk, or use wheelchairs.

Many Michigan drivers who kill a bicyclist in a crash are only charged with a misdemeanor, “Moving Violation Causing Death.” As LMB board member Bryan Waldman wrote in 2017, “given the current state of Michigan law, when a motorist injures or kills a bicyclist, the prosecutor is left with an almost impossible decision regarding the appropriate charge for the crime and it is damn near impossible to obtain a meaningful conviction.”

With input and feedback from LMB, the proposed bills will provide enhanced tools to law enforcement officers and prosecutors to seek appropriate penalties when drivers choose to drive recklessly and injure or take a life as a result. They build on past efforts in 2009, 2011, 2013 and 2015 to build a more just system of deterrence.

The bills create a new felony charge and expand a second to include vulnerable roadway users, and would legally codify an official definition for VRUs. A moving violation causing serious injury would be a class E felony punishable by imprisonment up to 5 years; a moving violation causing death would be a class C felony punishable by up to 15 years or a fine up to $7,500.

Any driver convicted of a misdemeanor or felony under the VRU law would be ordered to complete a basic driver improvement course approved by the secretary of state. Offenders can still be charged for other crimes under this law – it would give judges and prosecutors an additional tool.

Everyone deserves the choice to bike or walk safely. We already have increased penalties in Michigan for drivers who hit and kill road workers or police officers, and these bills follow the same principle. We strongly support them as a part of the solution to make our roads safer for people who walk, bike, and roll.

As your statewide bicycle advocacy organization, LMB is here day after day, year after year to improve life through bicycling. Sadly, 2020 saw a significant spike in bicycle (+81%) and pedestrian fatalities (+17%) across Michigan, despite overall crashes declining (-22%). Enacting strong Vulnerable Roadway User protections is just one way LMB is working to make our roads safer for all users.

But we need your help! Watch for further updates on how you can contact your elected officials on this important issue. The legislature is going on summer break, and we are working to get these bills up for a committee hearing afterwards.

In the meantime, please consider chipping in with a donation to support our ongoing advocacy efforts. As we work to advance a series of bills including VRU, safety stop, speed limit reforms, hands-free, anti-dooring, and legislation to clarify the definition of impeding traffic, we need your financial support more than ever. Whether you can donate $10, $100, or $1,000, every gift is greatly appreciated and helps us make Michigan a more bicycle-friendly state.