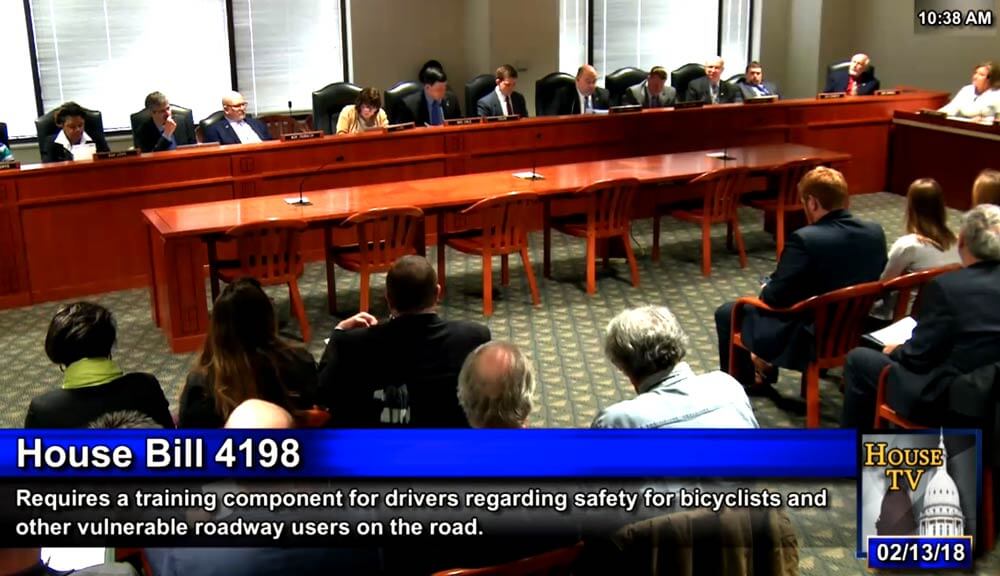 We are thrilled to share that the House Committee on Transportation and Infrastructure voted unanimously today in favor of our driver’s education improvement bill, HB 4198.

The bill was put to a vote after a workgroup on bicycle safety, formed by Committee Chairman Representative Triston Cole in late 2017, recommended an amendment that addresses which segments of the driver’s education curriculum instruction beyond the one hour minimum should be incorporated into.

We would like to thank the members of the House Committee on Transportation and Infrastructure, Chairman Cole, and members of the bicycle safety workgroup for their leadership on this important matter.

Thank you to everyone who took action in support of this legislation! We are one step closer to signing this bill into law because of you. We have more work to do, please continue to be involved as the legislative process moves on.

The House Committee on Infrastructure and Transportation also heard testimony on other bicycle safety bills, HB 4185 and 4265, at previous hearings. These bills would codify 5 feet as the minimum distance a motorist must give a bicyclist as they pass them on the roadway. The bills were reviewed by the Committee’s bicycle workgroup, but the Committee has not put the bills to a vote pending further discussion. We will post updates on this matter as soon as we can.

Categorised in: On Watch