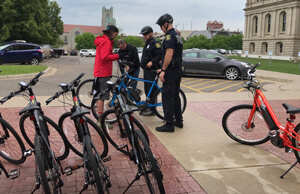 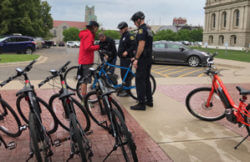 This legislation, HB 4781, 4782, and 4783, amends the Michigan Vehicle Code (MVC) to clarify the definition of e-bikes and outlines where e-bikes can be ridden legally on Michigan roadways and trails.

E-bike use has grown rapidly in Michigan creating an urgent need to clarify the classifications and regulations surrounding them. Prior to our legislation, the MVC lacked a definition regarding e-bikes, creating confusion for law enforcement over license and operation requirements, as well as for e-bike users, manufacturers, retailers, trail users, and land use managers.

The bills, sponsored by Representatives Holly Hughes and Klint Kesto, were introduced in June of 2017. The legislation was crafted through a collaboration between LMB, the Michigan Trails and Greenways Alliance (MTGA), the Michigan Mountain Bike Association (MMBA), People for Bikes, the Michigan Environmental Council (MEC), the Department of Natural Resources (DNR), PEAC, bicycle retailers, and other interested stakeholders. 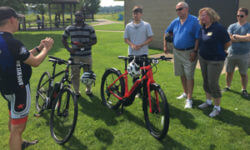 LMB also helped to host a number of e-bike demonstrations throughout the year, including one held during our Lucinda Means Bicycle Advocacy Day in May. LMB testified in support of the bill package at a House Tourism and Outdoor Recreation Committee hearing in early September 2017. The bills passed out of Committee soon after and moved quickly through both the House and Senate. They were presented to the Governor for his signature on October 24, 2017.

By signing the bills, the Governor enacted Public Acts 138, 139, and 140 of 2017. The Public Acts (PA) function to spell out the governance of e-bikes.PA 139 defines an electric bicycle or e-bike, as “a device upon which an individual may ride that satisfies all of the following: (a) The device is equipped with all of the following: (i) A seat or saddle for use by the rider. (ii) Fully operable pedals for human propulsion. (iii) An electric motor of not greater than 750 watts.” PA 139 goes on to divide e-bikes into three different classes.

PA 139 goes on to divide e-bikes into three classes:

Class 2An electric bicycle that is equipped with a motor that propels the electric bicycle to a speed of no more than 20 miles per hour, whether the rider is pedaling or not, and that disengages or ceases to function when the brakes are applied.

Class 3An electric bicycle that is equipped with a motor that provides assistance only when the rider is pedaling and that disengages or ceases to function when the electric bicycle reaches a speed of 28 miles per hour. 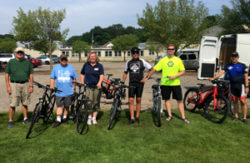 PA 139 further outlines other differences between the different classes of e-bikes. The chart below outlines some of the most significant differences: 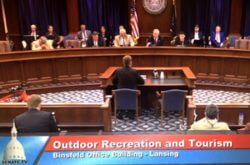 and PA 139 explain where e-bikes may be operated. All three classes of e-bikes are allowed on roadways: “an individual may operate an electric bicycle on any part of a highway that is open to a bicycle, including, but not limited to, a lane designated for the exclusive use of bicycles and the shoulder.”

Class 1 e-bikes are also allowed to ride “on a linear trail that has an asphalt, crushed limestone, or similar surface”. This means that Class 1 e-bikes are allowed on a typical rail-to-trail or similar trail facility. Local governing bodies, however, have the final say in whether an e-bike is permitted on a local trail and “may regulate or prohibit the operation of a class 1 electric bicycle on that trail.”

Class 2 and Class 3 e-bikes are more restricted in their use. They are allowed on “a linear trail that has an asphalt, crushed limestone, or similar surface, or a rail trail if authorized by the local authority or agency of this state having jurisdiction over the trail.” This means a local governing body must give special permission within their jurisdiction to permit Class 2 and Class 3 e-bikes on their trails.

All three classes of e-bikes are prohibited on any “trail that is designated as nonmotorized and that has a natural surface tread that is made by clearing and grading the native soil with no added surfacing materials.” This means that e-bikes are not allowed on mountain biking trails. However, again, local governing bodies have the power to permit e-bikes on their nonmotorized natural surface trails.

Even though a local governing body “may prohibit, authorize, or regulate the use of electric bicycles within its jurisdiction”, in order for them to exercise that power they must “hold a public hearing on the matter.”

See the chart below for a breakdown of where e-bikes may be operated:

PA 139 also prohibits e-bikes on Mackinac Island, unless an individual has “obtained the required permit from the Mackinac Island State Park Commission”.

In compliance with the Americans with Disabilities Act of 1990, individuals with disabilities who use an e-bike as a mobility device may ride on facilities that would otherwise prohibit e-bike use.

Finally, PA 140 stipulates that e-bike users are not required to maintain insurance for their e-bike.

E-bikes provide exciting new opportunities to travel further, both for transportation and recreational purposes. This is especially true for individuals with disabilities or physical limitations. They also open economic doors for independent bike shops and for communities along trails that could see more visitors.

We would like to thank our collaborators on this legislation including MTGA, MMBA, MEC, DNR and PEAC, as well as everyone who contacted their lawmakers, attended e-bike demonstrations, or otherwise helped drive our legislation forward. We could not have done it without you!