Bike safety is a broad and complex topic, and one way of approaching it in a systematic manner is by using the Hierarchy of Controls. The following explanation by “journalist and lifelong bike lover” Peter Flax (re-published here with permission) is one of the better ones I’ve seen. A bike helmet, correctly worn, can save your life – but if you get to the point where you need it to save your life, many things have already gone horribly wrong. – Matt Penniman, Communications Director, LMB

If you hang out on #biketwitter there’s a decent chance you’ve seen it before but thought it might be useful to quickly discuss. The Hierarchy of Controls is one of the more powerful tools to understand why bike helmets are not the safety solution our culture pretends they are. 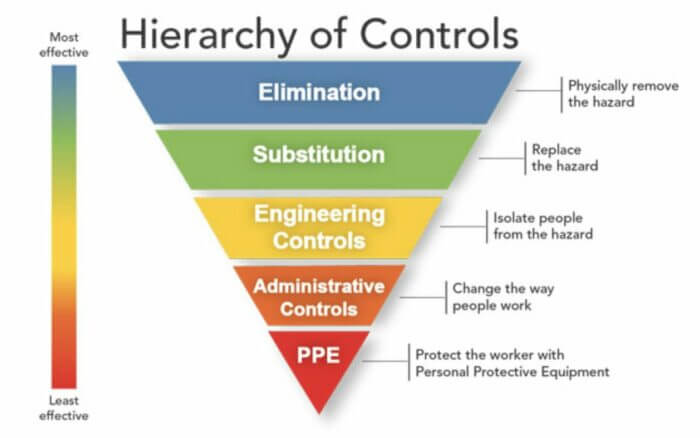 The Hierarchy of Controls is used by governments and industries worldwide. It’s a proven, systematic approach to protecting workers by controlling exposures to occupational hazards. This informs how safety is pursued on construction sites, factories, and tons of other situations.

If you stare at this inverted triangle, the executive summary is that decades of practice have determined that the stuff at the top is way more effective of impacting safety than the stuff at the bottom.

So let’s dive into a one-tweet explanation of each layer as it relates to bike safety.

Congestion pricing is a tool of elimination. Prohibiting motor vehicles within a block of an elementary school is a kind of elimination. Making a superblock like they’ve done in Barcelona is elimination. You literally remove the thing that causes the danger.

The green layer is substitution. This means trading a hazard for something less hazardous. Like removing a lane from a busy street and adding a dedicated bus lane. Or regulating SUV and trucks so way fewer people have huge, multi-ton vehicles with poor visibility.

In the area of substitution, one of the most powerful tools is public transit. The more we encourage drivers to get to a destination on transit, the safer roads get for everyone else. You’re not telling folks not to go to a sporting event, you’re just shifting how they get there.

The yellow level is engineering. Engineering controls are designed to remove the hazard at the source, before it comes in contact with the worker. We’re into the realm of infrastructure: protected bike lanes, bridges for riders & pedestrians, etc. It’s about isolating the risk.

This is a worthwhile point to call out in regards to bike lanes. Protected bike lanes isolate riders from the risk—aka motor vehicles—while painted bike lanes do not. I will not add commentary here on Sharrows but I am thinking it.

Moving down the chart toward less effective measures, the next layer is Orange—administrative controls. Basically we’re talking about rules here. Speed limits, 3 foot passing rules, no parking in painted bike lanes. These are obviously less expensive than the stuff above.

Perhaps worth noting that some hierarchies insert a layer called behavior below administrative control. This would be stuff like driver/rider education. Advertising campaigns to remind people about the hazards of impaired or distracted driving. Think about how low this is ranked.

OK, we’re at the bottom! The red layer is personal protective equipment. Widely known in the field of occupational hazards as the least effective tool to impact safety. Put latex gloves on EMTs, orange vests on road crews, helmets on construction workers (and bike riders!).

Here’s how I see helmets as PPE as part of the constellation of safety controls: They are hardly useless but they are literally the least effective tool in the toolkit to keep rider safe. And yet in public discourse, people talk about helmets like a first line of defense.

Imagine in fields like construction or road-building, if systematic forces did little to protect workers but harped on vests & helmets. This is what bike riders are up against. The same folks/entities that obstruct the higher levels of control like to obsess about bike helmets.

Just as preemptive reply to folks who think I’m arguing against helmets. I’m not. I’m saying that they are the least effective line of defense and that systematic forces are preventing all the more effective controls from being successfully implemented.

Have a great Saturday. Thanks for reading the thread!