While the pandemic has put a damper on some of our legislative advocacy, we were still successful in asking the governor to allow bike shops to reopen for no-contact sales and service. We were also successful, a few months ago, in obtaining official approval through MDOT for the use of the “Bikes May Use Full Lane” sign. 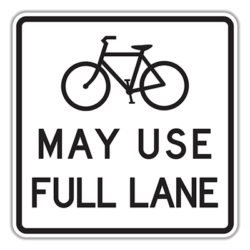 While the diamond-shaped “Share the Road” sign is common in Michigan, federal studies have found that it doesn’t communicate as clearly as a sign should. Drivers sometimes read it as intended – that they should yield space to cyclists – and sometimes read the opposite. “Bikes May Use Full Lane” is more direct and less ambiguous. But until recently, MDOT officials opposed its use, since state law does not use the “full lane” terminology in describing a bicyclist’s right to the roadway.

LMB made the case for the value of the sign and its compatibility with state law. We went through several rounds of discussion with several different people. We drew on the support of several advocates from around the state, including Bike Friendly Kalamazoo. And we succeeded.

The sign is now available for the use of all road agencies in the state, at their discretion. As it spreads, we hope to see increased respect for the rights of bicyclists, who are legally permitted to use the full lane in many circumstances.

Specifically, state law generally requires bicyclists to ride “as close as practicable to the right-hand curb or edge of the roadway” with a number of exceptions. One of those exceptions is “if the lane is too narrow to permit a vehicle to safely overtake and pass a bicycle.” With the passage of a three-foot safe passing standard across the state, many (perhaps most) lanes meet this description.

Still, signs are most effective if they’re placed where they will do the most good. LMB suggests that road agencies should place these signs in the locations where a cyclist is most likely to need the full lane, such as in a roundabout, when a bike lane ends but the lane continues, at narrow lanes with frequent bicycle use, near street parking (so cyclists can ride out of the door zone), or at intersections with frequent “right hook” crashes.

The Michigan Manual on Uniform Traffic Control Devices (MMUTCD) offers the following language in Section 9B.06: “The Bicycles May Use Full Lane (R4-11) sign may be used on roadways where no bicycle lanes or adjacent shoulders usable by bicyclists are present and where travel lanes are too narrow for bicyclists and motor vehicles to operate side by side. The Bicycles May Use Full Lane sign may be used in locations where it is important to inform road users that bicyclists might occupy the travel lane.”

The text of the relevant state law is in “What Every Michigan Bicyclist Must Know”, p. 25:

“A person operating a bicycle upon a highway or street at less than the existing speed of traffic shall ride as close as practicable to the right-hand curb or edge of the roadway except as follows:(a)  When overtaking and passing another bicycle or any other vehicle proceeding in the same direction.

(b)  When preparing to turn left.

(c)  When conditions make the right-hand edge of the roadway unsafe or reasonably unusable by bicycles, including, but not limited to, surface hazards, an uneven roadway surface, drain openings, debris, parked or moving vehicles or bicycles, pedestrians, animals, or other obstacles, or if the lane is too narrow to permit a vehicle to safely overtake and pass a bicycle.

(d)  When operating a bicycle in a lane in which the traffic is turning right but the individual intends to go straight through the intersection.

(e)  When operating a bicycle upon a 1-way highway or street that has 2 or more marked traffic lanes, in which case the individual may ride as near the left-hand curb or edge of that roadway as practicable.”