Clarifies the definition of e-bikes and outlines where e-bikes can be ridden legally on Michigan roadways and trails. 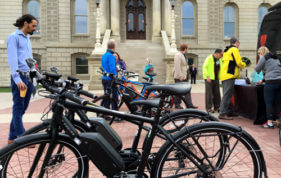 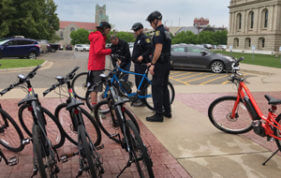 E-bike Law: What You Need To Know

This legislation, HB 4781, 4782, and 4783, amends the Michigan Vehicle Code (MVC) to clarify the definition of e-bikes and outlines where e-bikes can be ridden legally on Michigan roadways and trails.

E-bike use has grown rapidly in Michigan creating an urgent need to clarify the classifications and regulations surrounding them. Prior to our legislation, the MVC lacked a definition regarding e-bikes, creating confusion for law enforcement over license and operation requirements, as well as for e-bike users, manufacturers, retailers, trail users, and land use managers.

The bills, sponsored by Representatives Holly Hughes and Klint Kesto, were introduced in June of 2017. The legislation was crafted through a collaboration between LMB, the Michigan Trails and Greenways Alliance (MTGA), the Michigan Mountain Bike Association (MMBA), People for Bikes, the Michigan Environmental Council (MEC), the Department of Natural Resources (DNR), PEAC, bicycle retailers, and other interested stakeholders.

LMB also helped to host a number of e-bike demonstrations throughout the year, including one held during our Lucinda Means Bicycle Advocacy Day in May. LMB testified in support of the bill package at a House Tourism and Outdoor Recreation Committee hearing in early September 2017. The bills passed out of Committee soon after and moved quickly through both the House and Senate.

See our FAQ on the e-bike legislation.